One Habit to take you to the Next Level

I love my bed and I hang on to it as long as I can in the mornings, waking up only after the 3rd snooze alarm has gone off. I have known (at least in my head) that early waking helps you to get the best out of your 24 hours but I have always thought 'I will sleep late and stay up later.' This arrangement seemed to suit me fine especially being a night person that I am. I however had a whole change of mind a few month ago. 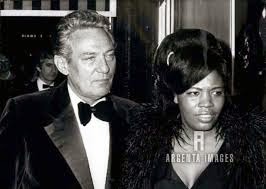 The late great Actor Peter Finch and Wife Eletha (curtesy Argenta Images)
I was trying to work out the setting up of a new gadget I had bought. I don’t like gadgets especially because there is this massive user manual that you have to weed through just to learn how to work anything from a camera or even the simplest plug-in on your computer. In this case I had tried over a couple of weeks to install the gadget correctly but most of the time I tried, I read the relevant manual pages over and over without grasping the right procedure. Other times I just didn’t have the mental energy to tackle it. Well on this faithful day, I had fallen asleep earlier than usual and so woke up at 5am. A sudden wave of inspiration pushed me into deciding that I would tackle installing the gadget with the few minutes I seem to suddenly have to spare this morning.
It took me all of 10 minutes to install the gadget that I had spent hours trying to figure out!
A fresh brain coupled with renewed will power was the reason why the problem that had stumped me for weeks took such a short time. I was clearer in my thinking able to see things I simply stared through when my mind was foggy and when I was tired.
A certain school of thought believes that our short term memory is 'discharged' and freed up for more information and mental work after night's sleep. In addition some experiments seem to suggest that your will power is also at it's peak when you wake. This means that you can take on challenging tasks without a heightened level of discouraging feelings and thoughts flooding in and the whole self sabotage dynamic coming in to play. You are then also able to perform task that require discipline and might be low on instant gratification. This is why it has been suggested that if you are struggling with overeating and have a poor relationship with food it would be better to eat the bulk of your food towards the end of the day when your will power is running low. In other words while you have the will power on your side, eat smaller and wait to eat bigger when you would really want to emotionally at the end of the day.
If you have to learn a new skill, do some intense studies, take on a task you are dreading and have been putting off, research a topic you've been stalling on then wake early and devote those very effective couple of hours to doing it. It will take less time, you will understand and pick up more and you will have the satisfaction of knowing you have been very productive which will crown your very day. In fact go one step further; make a habit out of it and wake up early each day and devote the first hour to some mental work for instance improving your IT skills and abilities through studying and reading and before you know it, you will be an authority/expert in the specific area.
I will be away from base for a while so next post is 12th April 2014

It seems that Mr Simon Cowell has finally been 'landed.'
Ok he may not be married to the woman but he is now the proud father of an infant son and it seems very clear that he will do all he needs to be in his sons life! He has taken to twitter and other media to display what is no doubt a deep genuine affection between father and new born. Insider accounts say he is besotted with the young bairn who he quite telling named Eric, after his late father. 'I have waited for you all my life' he is reported to have said at the arrival of Eric. It's lovely to see such father son affection, especially from someone like Simon Cowell who often seems incapable of loving anyone but himself. I wish him every joy in the world and it is easy to see that Eric is helping Simon plug the huge gaping hole in his heart that came about when his father died. Anyone who knows anything about Syco (yes the name of Simon's business concern), knows that Simon's father was the only man Simon strove to impress and losing his father just before his success was cemented was a very big blow to him.
Anyway why am I giving a rundown of the history of Simon Cowell?
I am writing about this intriguing story because Simon claimed for years and years to the media and to girlfriends that he wasn’t ever intending on being a father. He announced it repeatedly to all who could hear, that he was not a family man. I am certain he meant it for the time and I don’t think he really changed his mind, he just found himself expecting a baby with his paramour and she wanted to keep it and that was that. Suddenly he is enjoying fatherhood more than he ever thought he would or could and you see, that’s the thing, sometimes people genuinely don’t know what will make them happy. In life we sometimes stumble on the path that fulfills us, that’s why it is important not to close yourself off from other parts, people and situations. Sure we all specialize and focus in, as we grow older. We decide we will be a carpenter rather than a poet or a doctor rather than an electrician but if you become rigid about not letting yourself experience life beyond narrowed boundaries, you can miss out on so much that life has in store.
So my mind goes to the girlfriends who took his disinterest in being a father seriously. I know some broke up with him over this stand, others I think sadly might have tried to go along with his no child agenda and it might have severely damaged their own abilities to have their own offspring- one particular girlfriend comes to mind when I say this.
In truth, it’s very easy to go along with another persons 'agenda' and damage your own dreams, especially if you have become attached and feel that that is the only way to hold on to them. Si Co is a powerful man, with the lifestyle to match and the networks and connections that can make life smooth and pleasant for any woman. It could be all too easy to convince yourself under these 'incentivising' circumstances that you are of the same mind as him in the matter of children. I am glad some of his girlfriend parted company with him eventually to maybe keep their dreams of children alive. Which brings me to the second point.
Some of these women who moved on might look back and regret, but the truth is that their 'timelines' did not coincide with where Simon was at the time. This is a reality of life and you should not kick yourself if you cant get yourself on the same page as your romantic other. Don't hang about or try to make them fit with what you want to do or where you want to be. You must have the courage to move on. Even if you see that later they went and did exactly what you wanted from them but with someone else, know that it wasn’t for you and them. It’s easy to say, 'maybe if I had waited', but it is unlikely they would have 'changed' for you.
A lot of people change because of experiences and often times we act as that experience for others. Coming across us might be that catalyst for a change in some people's lives. I know men who have mistreated women and lost a good thing, learning a hard lesson on how not to treat people for their future. Some white men have let priceless black girlfriends slip out if their fingers (and vice versa) because of family, nay sayers and what have you. Having gone through that experience, they come out on the other side, vowing to never let others mess up their good thing ever again!
So to summarize, you must not sacrifice your dream to be with someone because you will regret it. Also you have to know what you want, what your deep felt desires and dreams are because If you don’t, it is easy for someone with their own firm ideas about what they want from life to sweep you along with them and apply you and your energies to what they want to do.

Once you have defined what things you want out of life. Pursue it with vigor!